Welcome to Town Hall 9, where players are introduced to lavahounds for the first time and the rest of your troops get stronger. At this point in the game, there are many different attack strategies. These could include:

If you go air, TH9 players can attempt to attack using a strategy called LavaLoon (lavahounds and balloons). Players can bring in two or four lavahounds and they should clear out all four air defenses. After the initial attack on the air defense, send in all of your balloon and hope they move fast enough to knock out the rest of the defenses.

For a ground attack, TH9's should get use to the strategy GoWiWi (golems, wizards, witches). In the troop composition, bring in two or three golems, three or four witches and the rest should be wizards. The golems act as a distraction to the defenses enough that the wizards and witches can move in from a distance and pick off structures one-by-one. 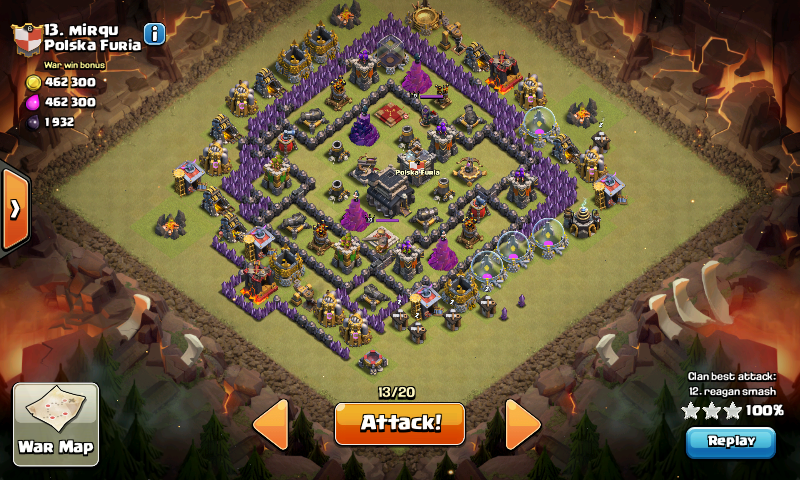 For the base above, the air defenses are very vulnerable by sitting on the outside portion of the base. This type of set up is great for LavaLoon. Start off your attack with one lavahound on each air defense. after about 15 seconds, the air defenses should go down and give the balloons enough room to destroy the rest of the defenses. As you summon the balloons, spread them along one side of the base and not all in one spot. Splash damage on a group of balloons can ruin the the attack immediately.